Different Types of Wasps You May Encounter This Summer We’ve all seen a wasp or two in our lives and may have even been caught shouting and scurrying away from one. People are afraid of wasps because of their aggressive reputation and ability to sting humans. But, more significantly, are all wasps violent, and are all wasps the same?

No, it does not. There are hundreds of Different Types of Wasps You May Encounter This Summer, just as there are thousands of different types of bees, ranging from honey bees to carpenter bees. There are nearly 4,000 in the United States alone! Wasps are frequently confused with other stinging insects. If you are having difficulty identifying a wasp, a wasp exterminator near me will assist you in detecting and securely removing a wasp nest from inside or outside your house.

This pest lives in the southeastern United States. The insect’s name comes from its yellow and black stripes. Yellow jackets prey on ants but can be dangerous to humans if disturbed. They construct above-ground globe-shaped nests near garages, sheds, and structural voids in dwellings.

A yellow jacket colony could consist of 1,000 or more workers. Yellow jackets are sociable insects, which means they live in colonies and collaborate as a group. Unless you disturb their nest, they will normally leave you alone. You should avoid disturbing a yellow jacket hive at all costs. The female is the only gender with a stinger, and she will use it to protect her nest if necessary. Furthermore, yellow jackets do not lose their stinger after assaulting their opponents and may sting their prey repeatedly if they are agitated.

The nest that these insects construct is what gives them their unusual moniker. It’s paper-like and umbrella-shaped. Nests are never closed and built in dark, lonely places. Nests hang from tree branches, twigs, porch ceilings, and door railings. A mature nest can house between 20 and 30 adult wasps. Paper wasps are sociable as well, but not as violent as yellow jackets. What do paper wasps consume? They eat beetles, flies, and caterpillar larvae as well as nectar. Although they are not as aggressive as other wasps, they will sting to defend their nest if it is disturbed. It is vital to mention that their sting is quite painful and might trigger allergic reactions in some people.

You might be asking why an ant appears on a list of wasp species. This is due to the Velvet ant being a wasp rather than an ant. Female velvet ants are hairy and dark in color, with a splash of yellow, white, or orange. Male velvet ants often have less hair and a more subdued coloration. Velvet ants are solitary wasps that do not have their own nest. They love to reside near meadows and sand plains. Females lack wings and can frequently be spotted moving fast on the ground. Adult velvet ants eat water and honey. Though they are not aggressive, if stomped on or held, they will sting, and a velvet ant sting is one of the most excruciating stings available, hence the nickname “cow killer.” 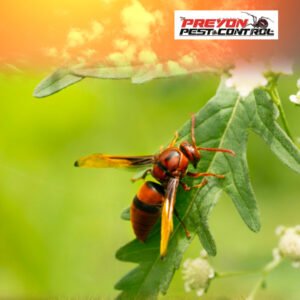 The word mud dauber refers to wasp species that build their nests out of mud, as the name suggests. Blue mud dauber, organ pipe mud dauber, and Sceliphron spirifex have this title. Mud daubers are often black with light-colored patterns or a metallic sheen. Their physique is long and slim, with a “thread-like” waist. Usually seen in porch ceilings, sheds, and attics. Despite being solitary, mud daubers can form groups. Unlike the other wasps listed, mud daubers rarely defend their nest, and mud dauber stings are infrequent. Mature mud daubers eat on honeydew, plant nectar, and spider body secretions. Some mud dauber species even eat dangerous black widow spiders.

Preyon’s wasp removal Chicago technicians can remove wasp nests from your house to keep you safe and give you a little information on How long Do Wasps Live and more. If you have seen any of the following wasps in your house or company, contact Preyon immediately by calling 708-232-7703 or contacting us online.