Wasp vs Bee: How To Know The Difference Between The Two

Wasps and honey bees can be confused because both insects can inflict painful stings. While honey bees can attack when provoked, wasps are more aggressive predators by nature. It is critical to distinguish between honey bees and wasps in order to administer appropriate wound care and pest control. Wasp vs bee: how to know the difference between the two? 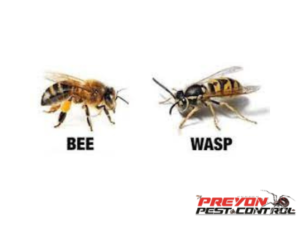 Wasps and honey bees are both members of the insect order Hymenoptera. Their physical bodies, however, differ. Honey bees are approximately 2.54 cm long. Some are completely black, while others have black or brown bodies with orange or yellow striations. Honey bees have hairy skin, whereas wasps have smooth and shiny skin. Wasps have four wings and can be brightly colored, with black and yellow patterns.

Wasps and bees have very different lifestyles and habits. Honey bee colonies can have over 75,000 individuals, whereas wasp colonies typically have fewer than 10,000. Queen wasps construct a nest for their colony, whereas worker honey bees establish and maintain hives. Unlike most wasps, which hibernate during the winter and build a new nest in the autumn, honey bees do not hibernate because they rely on food reserves and heat accumulated by thousands of workers. Wasps cannot produce honey, but all honey bee species can produce and store significant amounts of honey within their hives. While honey bees can only sting once and die after attacking, a single wasp can sting multiple times. Contact the best pest control Chicagoland for the best services,

Landing with impunity on uncovered food and drink, these insects aren’t particularly inclined to leave once they’ve sampled the delectable offerings of the average picnic. If irate diners press the issue by brandishing paper plates and rolled newspapers, they will not hesitate to defend their newfound bounty with a sting. Or four. That latter ability is perhaps the most telling sign that the primary suspects in a typical picnic raid are not bees at all. Wasps, not bees, are most likely the culprits. Wasps, unlike bees, can sting multiple times and buzz away (assuming their enraged victims don’t crush them).

Even the most uninterested observer can tell them apart in ways that do not involve being pumped full of venom. While there are approximately 20,000 species of bees and wasps (both groups belong to the order Hymenoptera, which also includes ants), the insects most likely to be confused are honeybees (Apis mellifera) and any of several representatives of the wasp genera Vespula (commonly known as yellow jackets). Looking at the insects, you can see what is causing the confusion. Yellowjackets and honeybees are striped insects with wings resembling bullets. (Some entomologists believe bees evolved from predatory wasps.) However, a closer examination of their appearances and behaviors reveals some significant differences.

Difference Between Wasp and Honey bees

Unlike honeybees, which have a light coat of downy hair that helps them collect pollen for later consumption by attracting it with static electricity as they sip nectar from flowers, yellow jackets have a spartan crew cut better suited to their proclivities for hunting other insects and scavenging in order to feed their larval siblings. (Adult yellow jackets eat nectar and other sugar sources.) They only hunt animal food to feed their squirmy white little sisters, who in turn secrete a nourishing fluid.) Yellow jackets have further adaptations to their raiding ways: aerodynamic and nipped at the waist, they are perfectly suited to taking down other insects or darting in to grab their share of whatever carrion and waste is on offer. Honeybees, on the other hand, have no need for such precise maneuverability as they buzz from flower to flower; this is reflected in their more rounded shape, with their bodies not tapering to the fighter-jet points of the yellow jacket. It’s also reflected in their neighborly absence from your outdoor feast; the human palate craves foods that are completely unappealing to bees.

So, the next time one of your lunch companions bolts from the picnic table, sounding the bee alarm, you might inform him or her of the culprit’s true identity. After the spread has been safely sealed from prying insects, perhaps invite your companions for a stroll and, like the real bees, stop to enjoy the flowers.

Wasp vs Bee vs Hornet

Bees, wasps, and hornets are difficult to distinguish. We don’t know what these buzzing, stinging, and biting critters look like or their living patterns because we avoid them.

Physical and behavioral traits differentiate them. Since these winged insects are ubiquitous in US, it’s crucial to identify them and protect yourself, your family, and your house. Below, we compare bees, wasps, and hornets.

There are many bee species.

Nearly 200,000 bee species exist. Chicagoland has 500 bee species, according to the Department of Agriculture & Consumer Services. Carpenter, honey, and bumblebees are common in California and the U.S.

North Carolina’s most frequent wasps are yellowjackets and mud daubers. And cicada killer wasps are rising. We’ll discuss the differences between solitary and social wasps later.

Bees are hairy, yet there are several sorts. Their hair regulates temperature and collects pollen. Pollen grains cling to their hairs, making pollen-gathering easy and effective.

Wasps and bees are in the same insect order, yet they differ. Yellowjackets and mud daubers are black and yellow and frequently mistaken for bees. Wasps have pointed abdomens and a slender waist, or petiole. Smooth and hairless. You can see their dangling legs when they fly, whereas bees’ legs are tucked in.

Like wasps, hornets have a slim, waist-narrowing body. Black-and-white or black-and-yellow hornets are common. Black and yellow may look like bees, however, bees have golden yellow colors. Bald-faced hornets are black and white. How can you differentiate a hornet from a wasp? Hornets are smaller and rounder than wasps. When flying, their legs are tucked in, unlike wasps.

When comparing bees, wasps, and hornets, consider their hostility. Some only bite, some only sting, and some do both.

Bumblebees are more aggressive than honey and carpenter bees. They can chase for a quarter-mile.

Female bees can sting as often as they like. Honey bees die after stinging people. Their abdomen-mounted stingers have barbs. The stinger is ripped from their guts and left in your flesh when they sting.

When their nests are threatened, hornets become hostile. Bald-faced hornets are more aggressive than wasps, while both are more hostile than bees. Read more about what is a black and white wasp and is it dangerous? These creatures sting even when there’s no threat. Preyon pest control is best in Chicagoland. You can contact us anytime at 708-232-7703.