Types Of Wasps That Live In The Ground

Wasps burrow in enormous numbers, with over 1,400 species recognized. Fortunately, they can be divided into three genera for easy identification. Three bee families are occasionally mistaken for ground-burrowing wasps. Unfortunately, they are very serious and venomous so it’s best to keep wasp extermination services on stand-by.

Yellow jackets are Vespula hornets, which are tiny, strong, and aggressive wasps that build their nests in holes in the ground. They aren’t real burrowers in the traditional sense. Rather, the queens find pre-existing holes and hatch workers to create paper nests inside them; nevertheless, you won’t be able to tell who they are by studying their construction patterns. Yellow jackets can be distinguished from other ground-nesting wasps by their numbers and how they react to you. Yellow jacket nests can include tens of thousands of wasps, all eager to sting you as a kind of nest protection. 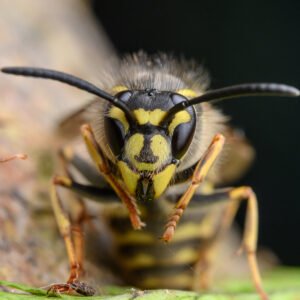 Cicada-killer wasps of the genus Sphecius are gentle giant slayers. There are over 20 species of these big guys, including North America. While their 2 inch length may appear to be intimidating, they’re only dangerous if you’re a cicada. Sphecid wasps are solitary, and females only utilize their sting to paralyze prey and store it in their nests to feed their young. Males virtually never sting in self-defense, while females almost never do.

Genus Sphex is home to at least 130 species of digger wasps, which are close cousins of cicada-killers. They can grow to be nearly as long as their larger cousins, although they are often considerably thinner. In their underground nests, they feed their young a variety of garden pests, including beetle grubs, grasshoppers, and crickets. So-called tracker wasps can monitor their prey across large distances. Female Sphex wasps are non-aggressive, and males are stingless. These useful agricultural insects have no effect on humans.

Is There a Chance That It’s an Impersonator?

The mining bees belong to the Andrenidae family. Digger bees belong to the Anthropodidae family. Both are occasionally confused for yellow jackets, but they are vastly different. Their food distinguishes them from wasps, since they feed nectar and pollen to their young instead of paralyzed prey, but their behavior is essentially similar to that of solitary digger wasps. Females dig holes in the earth for their nests and rarely sting or are stingless. All males are stingless. Burrowing bees are smaller than honeybees and have colorful colors and patterns that resemble yellow jackets. Adults have only a few weeks to live. These amazing pollinators do not endanger humans.

Eradicating the nests or wasp removal is a task for the professional. Don’t try to do it yourself — it could prove fatal. If you’re unlucky enough to stir up a killer bees’ nest, run away in a zigzag pattern and find the nearest closed shelter possible — including a motor vehicle. Japanese hornets stalk their prey in groups, but people aren’t their primary targets. If you are visiting Asia and become a hornet victim, seek medical attention immediately.

Our professional pest control technicians at Preyon Pest Control can remove your wasp nest and ensure your house is wasp-free. Please contact us at (708)232-7703 right away if you want to know more about the Types Of Wasps That Live In The Ground.