Do Wasps Sting More Than Once?

Many individuals are afraid of wasp stings because they can trigger painful and life-threatening allergic reactions. Wasps, which are more active during the summer, have the power to sting anyone who gets too close to their nest or cause them injury. These stings are terrible, and persons who have been bitten repeatedly may need medical assistance.

Wasps, unlike bees, can sting many times. If they sting you, they do not lose their stinger. This implies that during a single attack, each one might sting you numerous times. 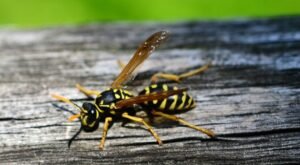 What’s the Difference Between Bees and Wasps When It Comes to Stinging?

Although they are related, bees and wasps are vastly distinct. Wasps are thinner than bees and have a different appearance. Wasps are more aggressive than bees, thus they are more likely to sting you. Bees lose their stinger after stinging because it is barbed and difficult to remove from the skin. Wane stingers are sharp and can be used repeatedly to sting you.

Is it true that all wasps sting?

Only female wasps have the ability to sting. Male wasps do not have stingers because they are mostly used for breeding and pollination. Females, on the other hand, have stingers and can sting. When they sting, they also produce a pheromone that alerts other female wasps that they have been stung and need assistance. This attracts more female wasps to the area, perhaps resulting in further stings.

What Makes You Think a Wasp Would Sting You?

Stingers are used by wasps to catch their prey. By stinging the species they wish to consume and killing it with the chemicals in their sting, they collect food to eat. Humans are too big for the toxins to act, therefore unless they have a serious allergy, they won’t die from a sting. Wasps sting humans more often than not because they feel threatened. If they feel the need to defend their home, they will sting. They can also attack if they become disturbed, which can occur simply because a human approaches their nest or flailing their arms in an attempt of temporary wasp removal Chicago encouragement toward them.

Is it true that wasps die after stinging you?

What is the maximum number of times a wasp can sting?

A wasp can sting an unlimited number of times before they can no longer sting. They can use their stinger as many times as they want because they don’t lose it when they sting. When they sting someone or something, they emit venom. The amount of venom they can store in their bodies is restricted, with some wasps being able to store more at once. When the wasp runs out of venom, they will have to wait till they produce more before their stings become painful again. As a result, they may be unable to sting while their venom regenerates. If they feel the urge to assault whatever is endangering their nest, they can sting again once they have more venom.

What Causes Wasp Stings to Hurt?

Stings from wasps are painful both because of the sting and because of the venom discharged. Even though the amount of venom is minute and will not kill someone unless they are extremely allergic to the stings, the poison is nonetheless painful. Different wasps have varying venoms, and when they sting, they produce a different amount of venom, hence some wasp stings are more severe than others. Yellow jackets have a pain score of roughly 2.0 on a scale of 1 to 4, but a tarantula hawk wasp has a pain score of 4.0. When wasps sting someone numerous times, the pain can be excruciating, though it normally subsides in 5 to 10 minutes on its own.

What Is the Best Way to Treat a Wasp Sting?

Irrespective of your reaction, most wasp bites can be treated at home. Wash the area around the sting with soap and water to start. This aids in the removal of as much venom as possible. To relieve swelling and pain, apply ice or a cold pack, and keep the area clean and dry to avoid infection. If the stinging region becomes itchy, it can be covered with a bandage or hydrocortisone cream. Antihistamines can assist minimize itching and over-the-counter pain medications can aid with the pain. Get medical help if you’re unsure if you were stung by a wasp or a bee, or if you’re having a poor response.

What Happens If You Have an Allergic Reaction?

Those who are highly allergic to wasp stings should seek medical help right away. If an EpiPen is available, use it immediately after the sting. They should then dial 911 and be brought to the nearest emergency room. They may require oxygen, steroids, or other drugs to help them breathe better, as well as epinephrine to prevent the allergic reaction from worsening.

Wasps are more likely to sting at certain times of the year.

Female wasps hibernate over the winter, so you are less likely to be stung. They become much more active during the summer months when the weather is warmer. As the weather warms up, most homeowners who have wasps near their home may notice an increase in activity from the wasps in the spring, with peak activity in the summer. Wasps sleep at night and work during the day, just like humans. During the day, wasps are more likely to sting you, though they can be roused by lighting the nest.

Is it possible to get rid of wasp nests?

Wasps that build nests close or on your house are more likely to sting you to safeguard their nest. It is not suggested for anyone to attempt to dismantle a nest on their own since they may be stung. If you have a nest and want to try to remove it on your own, try to do so at night when they are more docile and less likely to sting. Wear protective clothing that covers your complete body and avoid using torches or other light sources that could attract wasps.

The nest should be packed in a rubbish bag and removed from the structure. If at all feasible, keep pest control chemicals on hand to attempt to eradicate the nest for added wasp protection. If you’re allergic to wasps or the nest is in a difficult-to-reach location, you shouldn’t attempt this on your own. It’s advisable to utilize a professional wasp nest removal service whenever possible.. They have the knowledge and tools to safely remove the wasp nest while minimizing any dangers.

Wasp Nests: How Can They Be Prevented?

Wasp nests can be removed, but they should not be near your home. Assure your home’s security and seal any potential entrance points. Ensure that all windows have functioning screens for DIY wasp pest control from entering through them. Wasp traps can catch any flying wasps in your yard. This can help catch wasps before they build a nest nearby.

Even if you aren’t allergic to wasps, they can be harmful because they can sting multiple times. A specialist can help you avoid wasp stings to you, your family, and your pets. This can help keep you and your family safe during the summer months.

Should you get the urge to learn more about Do Wasps Sting More Than Once, please contact us immediately at (708)232-7703.