Do Wasps Sting At Night?

Wasps can be spotted feeding on and pollinating the early blooms as soon as spring arrives. Although they aren’t as aggressive as yellowjackets or hornets, they can sting you multiple times and cause severe agony. Wasps are active during the day, but do they have the ability to sting you at night? They don’t usually attack at night, and as long as the nest isn’t disturbed, you’re safe going near wasp nests after dark. These chapters will teach you more about wasp behavior, wasp exterminator, and how to protect your home against wasps.

What Do Wasps Do During the Night? 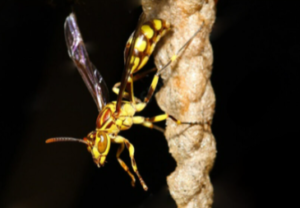 Wasps return to their nests after the sun sets to care for their young and feed them. The insects return to the nest throughout the day, bringing food with them. Nectar makes up the majority of their food, although they also eat fallen fruit, sweet substances, and other insects. Although most wasps are vegetarians, immature drones will sting spiders and other tiny insects in order to feed their young.

Sunlight allows wasps to navigate the world more effectively, but when they return home after sunset, they labor all night long without sleeping. Until they leave in the morning, they spend their time maintaining the nest’s structure and feeding their babies.

Wasps: Why Do They Attack?

A wasp, unlike a honeybee, may attack several times without its stinger breaking off in your flesh. Stings can cause painful welts that take a few days to heal. If you’re allergic to wasps, you should be extra cautious around them. Wasps, despite their intimidating appearance, rarely attack unless provoked.

You’re less likely to be attacked if a wasp is exploring the terrain far from its nest. The insects are territorial, and if anything comes close to the nest, they attack. Most nests, on the other hand, are built at higher heights, such as a garage ceiling, attic space, or beneath the soffit of a storage shed. As long as you leave the nest alone, walking beneath it will not result in an attack.

A single wasp bite is painful enough, but when their nest is threatened, the insects tell the rest of the colony to stop working and swarm the intruder. Swarming wasps are known to attack your head and face, so stay away from their nest at all costs.

Which Insects Sting in the Dark?

It’s likely that you saw a wasp-like creature buzzing around at night, and it was an English hornet. Hornets have large abdomens and are active at all hours of the day and night. Hornets, unfortunately, are more aggressive than wasps and can sting in the dark.

Wasps sting you as a survival instinct, but hornets can attack you even if you don’t irritate them. If you happen to be in the way of a hornet, attempt to get out of the way.

How To Stay Away From Wasps

Only professional pest control services should remove nests. Untrained people who disturb the nest might be severely harmed by swarming wasps. These recommendations, on the other hand, can help you secure your house and family:

Make an appointment with a professional.

Wasps can build nests both inside and outside your home, and big nests can house thousands of wasps if left unattended. Preyon Pest Control‘s expert pest control technicians can remove your wasp nest and ensure that your home is wasp-free. If you’re interested in learning more about Do Wasps Sting At Night, please contact us right away at (708)232-7703.