Can Wasp Stings Cause Diarrhea

Every year, thousands of individuals seek treatment for bug stings in hospital emergency departments. Allergic responses can be fatal in 0.4% – 0.8% of children and 3% of adults. Anaphylaxis to insect stings kills 90–100 people every year. 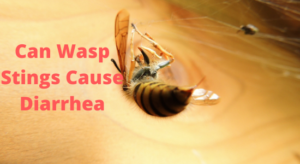 Wasps, yellow jackets, hornets, and honeybees sting most Americans. With almost 260 million acres infested, the red or black imported fire ant is a considerable health risk and may be the leading cause of insect stings. Wasp stings cause so many problems but can wasp stings cause diarrhea?

The degree of an insect sting reaction varies. A normal reaction causes localized discomfort, swelling, and redness. Wash the area with soap and water and use ice to minimize swelling. Preyon Pest Controls are the best exterminators wasps and they’re well known for their service.

A large local reaction causes swelling beyond the sting site. A sting on the forearm, for example, could cause arm edema. Despite its look, this disorder is frequently treated as a typical reaction. A particularly painful or large local reaction may necessitate medical care. Antihistamines and corticosteroids are sometimes prescribed to help with the discomfort that can last two to three days.

Yellowjackets, hornets, and wasps sting repeatedly. Honeybees sting their victims with barbed stingers. To avoid squeezing more venom into the skin, scrape the stingers rather than pull them.

An itchy lump or hive forms at the sting site of almost everyone who gets stung by fire ants. A small blister appears four hours later. Within eight to twenty-four hours, it appears pus-like. Unless the blister is opened, what is seen is dead tissue. These lesions can leave scars when healed.

If the pustule is scratched or broken, the pustule will become infected. Prevent secondary infection by washing the blisters. Don’t pop it! Irritation caused by these reactions can be relieved with topical corticosteroids and oral antihistamines

An allergic reaction is the most serious insect sting reaction. This condition necessitates prompt medical allergic symptoms including:

If you have had past stings, your allergist should ask about them, your reaction to them (what you felt, how long it lasted, and what you did to seek relief), and any other symptoms you are experiencing. A skin prick test, an intradermal skin test, or a blood test may be used to identify insect venom allergy.

An innocuous-looking patch of skin on the back or forearm is punctured with a sterile probe to allow the insect venom liquid to seep into the skin and cause irritation. An allergy might be detected by a raised, crimson patch within 15-20 minutes. Anti-venom immunoglobulin E (IgE) antibodies are measured in blood samples.

The intradermal skin test is used if the skin prick test is negative or equivocal. After around 15 minutes, the location is checked for allergic response symptoms. For detecting IgE antibodies, this test is considered more accurate than skin or blood testing. Blood testing may be recommended if both skin prick and intradermal skin tests come up negative. The severity of a skin or blood test reaction does not predict the severity of an allergic reaction when stung.

Asthma attacks can be fatal if not treated quickly. Treatments for emergency situations frequently involve epinephrine, antihistamines, corticosteroids, intravenous fluids, oxygen, and other medicines. They need to be hospitalized overnight once stabilized.

Using venom immunotherapy, an allergist can avoid future allergic reactions to bug stings. Gradually increasing venom doses are given to patients to reduce their sensitivity. Thus, the chance of an allergic reaction is reduced. Anit-sting sufferers can return to regular life in a few weeks or months.

Seek medical attention if you suspect an insect sting allergy. An allergist will decide if you are a candidate for skin testing and immunotherapy based on your medical history and specific tests.

Yellowjackets nest in the ground and walls. Hornets and wasps build nests in bushes, trees, and walls. Work and play in these locations with considerable caution. Yellowjackets are attracted to open trash cans and exposed food at picnics. Also, when outdoors, attempt to minimize exposed skin. Attractant baits are used effectively to cure fire ant mounds. Soybean oil, corn grits, and chemical agents are common ingredients in this bait In the mound, worker ants pick up the bait and carry it to the queen. These pesticides can function for weeks.

The two-step treatment for fire ant sting allergies is:

How Is a Fire Ant Sting Treated and What Is the Natural Reaction?

A fire ant sting reaction ranges in severity. Unlike other insects, fire ants usually sting numerous times in a single occurrence. Because hundreds to thousands of fire ants respond when a fire ant mound is disturbed. Each ant can also sting many times. Mandibles (jaw) ants bite and sting repeatedly. If not removed, a semicircular sting pattern results. Fire ants are difficult to remove because they use their mandibles to grip on.

A painful lump or hive develops at the sting site in almost all patients stung by fire ants. A tiny blister appears four hours later. Within eight to twenty-four hours, it appears pus-like. Unless the blister is opened, what is seen is dead tissue. These lesions might leave scars when healed.

Secondarily infected pustules can be treated with antibiotics. Prevent subsequent infection by washing the blisters. Don’t pop it! Soap and water should be used to clean any open blisters. Irritation caused by these reactions can be relieved with topical corticosteroids and antihistamines.

Preyon pest control is offering the best service to get rid of wasps. Sometimes you get pimple-like stings that can be harmful and cause another disease so we’re here to rid you of your all problem related to wasps. For more information call 708-232-7703.