Are Bee and Wasp Stings The Same

A sting is all or nothing for a bee; the bee loses its stinger and injects a large volume of venom — typically around 50 micrograms.

A wasp with a stinger injects 2 to 15 micrograms — but it can do so many times. The venoms are chemically distinct, but the effects are similar. But many people ask are bee and wasp stings the same? 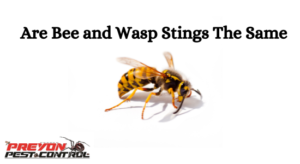 You may be allergic to one type of sting but not another. Both types are complex chemical mixtures, but here’s a rough idea of what’s in them:

Bee stingers should be removed because the venom sac remains attached when the bee flies away and can continue to inject venom for an extended period of time. Antihistamines may help a little, but if you have a severe allergic reaction, call 911 right away. You can also call wasp removal chicago to get rid of wasps.

What Is The Difference Between Bee and Wasp Stings?

What Is the Best Way to Treat Bee and Wasp Stings

Bee stings should be treated by first removing the stinger if the reaction is mild:

Treatment for the sting:

If a bee or wasp sting causes a severe reaction or anaphylaxis, seek immediate medical attention. Advanced Life Support (ALS) protocols should be followed in the hospital.

In the Americas, where the Africanized bee has become endemic, anyone who has received more than 50 stings (‘massive stinging’) should be evaluated for anaphylaxis and toxic envenomation.

According to a review, venom immunotherapy significantly reduces the risk of systemic and large local reactions, as well as the risk of anaphylaxis, thereby improving quality of life.

Venom immunotherapy may be advised for:

The vast majority of bee and wasp sting reactions are localized and resolve in a matter of hours to days. Typically, episodes are rare, and simple preventative measures are all that are required. Sensitization can develop with repeated episodes, as seen in beekeepers and agricultural workers. Following an anaphylactic episode, the risk of subsequent anaphylaxis is less than 50%, and even lower in children.

Preyon Pest Control is well-known for wasp exterminator services in the town. As hornet and wasp stings both are dangerous. For more information, call 708-232-7703.